Do you love drinking wine? Well, if the answer to this question is affirmative then you belong to the vast majority of people who do and who are actually passionate wine lovers.

However, has it ever happened to you that you are trying to open a bottle of wine with a wine opener and that you simply cannot do it? You are not alone since it has happened to everyone. So, let’s see hot wine openers should be used, and what types of those exist.

Many people consider that rabbit wine opener is the best wine openers since they are the simplest ones. Why?

First of all, they have a very straightforward design that makes opening a bottle of wine as easy as a piece of cake. The rabbit-style wine opener has a clamp and this clamp is put around the neck of the bottle.

There is also the lever, and this is the most important part since the lever is the thing that is used to control either the worm or a spiral. So, what is the procedure?

You should place the entire opener in the way that the clamp is put around the neck of the bottle. Then, the worm or a spiral should enter the cork.

After this, the lever should be used to enter the corn and by pulling it up, it pulls the cork out.

This one has been present for centuries and it is considered to be the simplest and easiest one as well. First of all, the design of this one is very simple and straightforward without any additional mechanisms.

The opener usually has a kind of a blade that is used for the removal of foil that covers the cork and bottleneck. Then, there is the worm that is placed into the worm by simple twisting in a circular way.

This may be just one bad thing about it since it is needed to use a bit of a force to pull the cork in and out. When this is done, there are two levers for pulling the cork out.

Do many people believe that this is the safest way to open a bottle of wine? Why? First of all, there is not any debris left in the wine when the cork is pulled out since there is not any part of the opener that goes into the opener and drills it. How does it function?

First of all, there is also a part here that is used for the removal of the foil that covers the top of the cork and the entire bottleneck. When this is done, the opener is applied.

First of all, the opener itself has two prongs that should be inserted but not into the corks, they are to be placed between the cork and the bottleneck. It goes smoothly and no additional effort is needed.

The important thing to be noted is that the second prong should be inserted before the first one goes all the way down. The opening goes smoothly by twisting the entire opener holding it by the handle and then opening.

There is also one tip: you can open ¾ of the cork and then you can remove the entire cork by your hand.

This one has been in use for the longest period of time. Its design may be considered a bit odd, but it is extremely functional. First of all, it has a worm that needs to be manually inserted into the cork by twisting moves, when this is done, the handles, which have been raised during the inserting, are pulled down and the cork is then taken out.

This one has the simplest design possible. The worm is placed into a holder, the hat is also used as a handle later on. Then the handle is used for twisting the worm into the cork. After this is done, the pulling up move is used for taking the cork out.

6 Accessories Every Experienced Wine Drinker Has In Their Kitchen

6 Best Double-Hinged Corkscrew You Can Buy in 2020

11 Best Wine Openers and Corkscrews in 2020 – Reviews and Picks

Transporting Wine? Here’s Why a Beverage Delivery Bag is an Absolute Essential

Can you Bring a Corkscrew on an Airplane – 2020 Guide

Adelina Lillie - July 7, 2020
0
It may seem like it’s very easy to pair wines with chicken since the white meat has a distinctive flavor. However, it’s really not...

6 Accessories Every Experienced Wine Drinker Has In Their Kitchen

What is Rose Wine – 2020 Beginners Guide

6 Best Double-Hinged Corkscrew You Can Buy in 2020

Transporting Wine? Here’s Why a Beverage Delivery Bag is an Absolute... 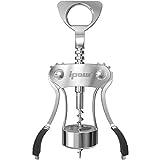 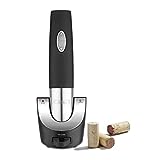 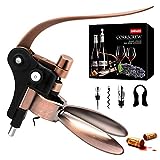 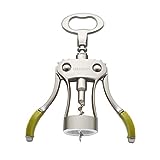 The perfect wine for a healthy lifestyle. Bon Affair contains half the calories of regular wine, has zero sugar, and goes great with just about anyone!
Contact us: kravitzcj [at] gmail.com

We use cookies to ensure that we give you the best experience on our website. If you continue to use this site we will assume that you are happy with it.Ok